Did you know the paper £5 note will no longer be legal tender after the 5th May??
The Bank of England issued a new polymer £5 note on 13 September 2016 which will replace the £5 paper version from 5th May 2017.
Don’t panic, most banks, building societies and post offices will exchange these for you until the 5 May 2017. After this period, if your bank, building society or even post office decides not exchange the paper version, you can exchange the note in person with the Bank of England in London.
Here’s a few security features to check the authenticity of the new note:
• A clearly defined portrait of the Queen is printed on the see-through window with the words ‘£5 Bank of England’ printed twice around the edge
• The border of the window changes from purple to green when the note is tilted. This can be seen on the front and back of the note
• A silver foil patch which changes from ‘Five’ to ‘Pounds’ when the note is tilted, and a multi-coloured effect appears
• A silver foil patch containing an image of the coronation crown which appears 3D. When the note is tilted a multi-coloured rainbow effect can be seen
• The printed lines and colours on the note are sharp, clear and free from smudges or blurred edges
• When running your finger across the front of the note you can feel raised print in areas such as the words ‘Bank of England’ and in the bottom right corner, around the number ‘5’ 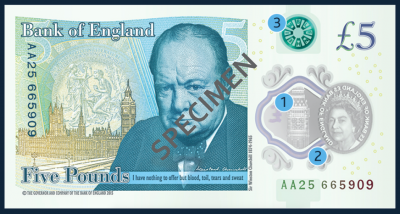